What to Know about the Online Dating Landscape in 2018

Online dating has become an integral part of digital lives since it emerged in the mid-1990s.

Today, 41% of online singles globally have used online dating apps or sites within the past month.

Overall, it’s one of the most popular activities online – on par with Skyping and listening to podcasts.

At 65% of the user base, men outnumber women almost 2 to 1 as the biggest online daters.

Most growth in the online dating market seems to be coming from location-based dating apps, like Happn and Badoo, which have crept up slowly from 7% monthly usage to 13% in the past three years.

On the other hand, paid-for online dating services have flatlined, as illustrated in our latest infographic taking an in-depth look at the global online dating landscape.

Acceptance and adoption aren’t universal though. As expected, younger people make up the majority of online daters:

Among singles who use the internet, online dating peaks at the age of 25.  This audience is truly global too, especially throughout emerging markets.

Populations in these markets are generally younger, but the greater popularity holds up even after taking age differences into account.

This means dating apps face larger implicit competition from other sources of socializing – dating-led or not.

But it also reveals the potential to integrate with social media platforms, which we’ve already seen with Facebook announcing it was trialling a dating app. Six in 10 singles aren’t dating online – some because they ‘aren’t on the market’, others because they wouldn’t be inclined to use an online dating service.

This implies that there are personal circumstances and traits that set online daters apart.

We see a cultural effect on a regional level: Overall, online dating is much more popular in the Asia-Pacific and Latin American regions, perhaps because these markets are mobile-first in nature, compared to Europe where we see a greater degree of digital conservatism.*

Regional differences only begin to scratch the surface.

Specific market-level effects around marriage and dating culture seem to have a greater impact.

Germany, Belgium and the Netherlands have online dating percentages in the 20-30s, whereas almost half of singles under 35 in Denmark and Sweden have used online dating in the past month. The contrasts in the Asia-Pacific region are even starker: Countries like South Korea and Japan have massively lower rates of online dating among younger singles than neighboring China, where 52% of all singles have used some form of online dating in the past month.

One of the few factors that can explain the difference in online dating adoption among similar age groups on a global level is the average age for first getting married in each country.

Broadly speaking on a national level, lower average age at first marriage is associated with a higher prevalence of online dating among 16-34 year olds, at least among the online populations in the 37 markets which we collect this data from.

There’s a clear connection between the share of the online population who say ‘family is the most important thing in their lives’ and the prevalence of online dating, as the chart below shows.

This reflects how marriage and family values are linked to the importance of finding a partner in the sub-30s segment who dominate online dating. For those looking for a long-term partner, apps like Baihe, which boasts 100 million users in China, can facilitate this kind of relationship-focused online dating.

There’s a bold streak in the value statements that younger online daters tend to agree with.

They’re more prone to describing themselves as risk-takers, though this is common in younger audiences (54% vs 48%), and to be seen as adventurous by others (52% vs 45%).

We can’t attribute it to their experiences with online dating, but they’re somewhat more likely than non-daters of their age to see technology as something that complicates life – 37% agree.

Nevertheless, most online daters (62%)agree that the internet makes them feel closer to people. In the 18-30 age groups, online daters are more likely to visit cinemas, drink alcohol, and eat out at restaurants at least twice a month.

They’re keen on keeping up their self image, too – 54% say like to keep up with the latest fashions.

This reflects something crucial: Online dating isn’t replacing any kind of offline connection or behavior, at least not for the cohort as a whole. The closeness they feel the internet is giving them reflects on their offline behavior, which is more social than their age group would imply.

As long as online dating apps can tap into their users’ social and lifestyle needs, and continue to inspire the purposeful, offline-driven experiences, they’ll be well-positioned for a second, third and fourth date with the world’s online singles. 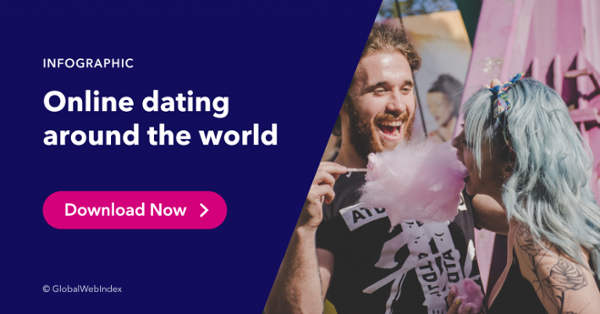 Unless elsewhere stated, results are based on the Q2 2018 wave of fieldwork which included 11,425 online daters. Respondents in the Middle East-Africa region not included.